Advertising, podcasts, films – sexual visuals are omnipresent in this day and age. Many topics are no longer shameful, yet others are all the more so seen as taboo. The subject of sexual freedom of movement is widely regarded as a current phenomenon. Spoiler alert indeed!! The release of inhibitions when dealing with sexuality isn’t new. In fact, alongside humanity, sexuality topics and trends have fluctuated and continue to fluctuate across time and history.

Eroticism, love and sexuality were central themes found in literature and art during those times. This is clearly evident in everyday Roman art: whether it is a mug, vase or a lamp made out of clay – almost everything was decorated with sexual motifs.

Phallic images were omnipresent: often used to threaten potential incoming thieves, Priapus statues were present in the gardens surrounding the villas and were recognizable as they possessed a huge erect limb. There were also many amulets in phallic forms where the male figure was represented very small but then his “Lucky Charm” (the phallus) on the contrary was showed more dominantly. Erotica was found amongst all the different classes within Roman society, and not solely in the bedroom. The wealthy Greeks for example could use better and nobler materials and afford more delicate designs. 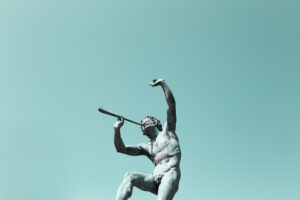 If you research sex and Antiquity a little more, you can also take a look at Egypt: A special representation is the Turin papyrus 55001 which measures 2.59 meters long and 20 centimeters high. Next to the texts are men and women shown in different sex positions. The men are seen with huge limbs and are satisfying the women in twelve different sex positions. And some of it is rather on the creative side: and Egyptian with a giant phallus is penetrating a woman while she stands balanced on one leg.

Sexuality was celebrated in antiquity and was approved of like a glass of wine: In ancient Rome, wine was amongst the staple foods. Also, you could pay for sex at nearly every corner and it didn’t make a dent in your wallet either. You could visit a prostitute for two copper coins, the same you would’ve paid for two loafs of bread and a half liter of wine.

It almost sounds like people back then were living life on the wild side and were very emancipated versions of themselves. Well, this being said let us not forget that this description doesn’t do justice to the majority of the population who had very little money at the time. Also, the sexuality depicted was probably exclusively to satisfy the man’s desires with women unfortunately still holding a subordinate role.

Are you in the mood to jump to different times? Then check out Sex & Sensibility